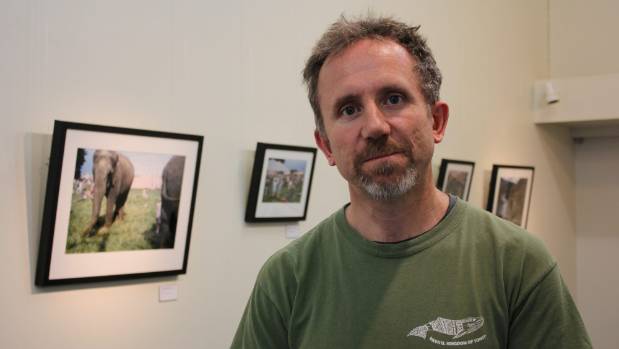 The exhibition, Recent Work, features the artist’s trademark old building captured against a glittering, evening background as well as shots from around the region and abroad.

In addition to Bone’s work, the exhibition features a retrospective show of his grandfather, William Bloy’s photography which was rescued from going to the tip.

On Sunday, July 30 Bone will speak about his work from 4pm to 6pm at the gallery.

They say one man’s trash is another man’s treasure, so Kevin Bone took it to the next step and created an art exhibition.

Bone’s exhibition is currently on display at the Lysaght Watt Art Gallery in Hawera and is a mix of his recent photography, and his grandfather’s photography from the 1950s.

“I’d always known that the slides were there, I remember always going through it when I was a kid and investigating it,” Bone said.

“Maybe that’s why I got into photography.”

His grandfather, William Bloy, had taken “thousands” of coloured photographs of scenery, family and events in the south of the South Island more than 60 years ago.

“He was a child prodigy. He could play the violin when he was four, he was an artist,” Bone said.

Bone said his grandfather’s photographic slides had been passed down the family until they sat in a garage for years.

“They were going to be biffed and I rescued them,” he said.

Bone said he never truly appreciated the slides until recently. His favourite photograph is the elephant at a circus.

There were also multiple photographs of bare land, which Bone said were the “most valuable” pieces of real estate in New Zealand now.

Bone’s photographs are from around Taranaki, and also overseas.

“This is my journey, and it’s really trying to find things that people aren’t photographing,” he said.

“I like the idea of abandonment, and its history.”

A few of his photographs were from his time in Tonga where he went swimming with whales. “I was right beside the mother whale, which was the size of a bus, and her calf, the size of a sedan.”

As president of the Hawera Camera Club, Bone has a great input and recently helped bring home awards for the annual interclub competition between the region’s four photography-loving groups.

The Hawera club won first place in the Club Set Prints, and an individual won the Overall Champion Print too.

Bone’s exhibition runs at the gallery until August 5.

Source: Photos about to be ‘biffed’ now displayed in exhibition | Stuff.co.nz

View all posts by Katie Russell